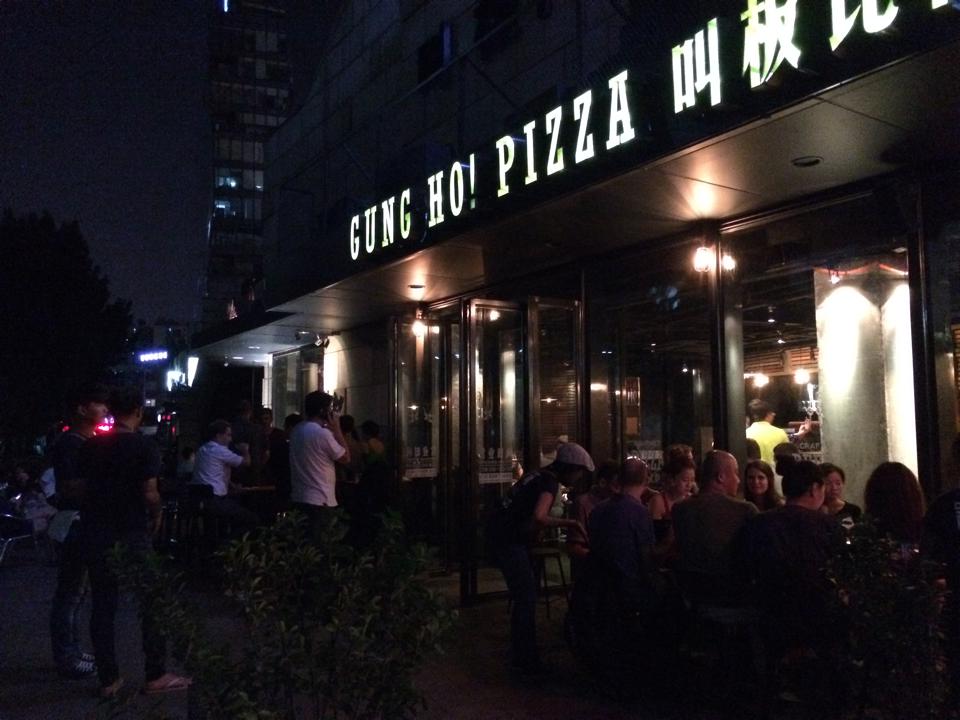 Gung Ho! Pizza store in Sanlitun, Beijing on the opening night after renovation

Operational efficiency, created by “greening” business operations, can create direct economic benefits for businesses in China, where energy costs, as opposed to fixed labor costs in the US, can be a company’s main expense. For example, in Beijing, commercial electricity is about twice as expensive as the average in the United States. On the other hand, the hourly cost of labor is about four times cheaper in Beijing according to minimum wage reports.

Becoming green is often associated with, and does include, visible changes such as green materials and paints. But more importantly, it involves evaluating the less-visible, energy-consuming operating systems such as the water heating systems, ventilation, air conditioning, equipment and lighting systems; the choices made in water-consumption; transportation of personnel and delivery services; and minimizing the production of waste.  These back-of-the-house systems incur the highest operating expenses and cause long-term environmental impacts.

Understanding that operational efficiency is the key to being green is gaining importance not just in China, but worldwide. China’s Three Star building standards first published in 2006, and most recently updated in 2013, closely resemble the United States’ LEED (Leadership in Energy and Environmental Design) requirements but have always incorporated operational efficiency as a requirement.

A small business sets an example

Gung Ho! Pizza, a small business in Beijing, is purposefully going green. Inspired by Yvon Chouinard, the founder of Patagonia, an outdoor clothing and gear company and global leader in environmental responsibility, Beijing’s Gung Ho! Pizza founders Jade Gray and John O’Loghlen set out to be the “Patagonia of Pizza” when they crafted their business plan in 2009.

Committed to the three pillars of sustainability ­– people, planet and profit – GHP was already cutting a path to sustainability when I was hired as Sustainability Advisor in 2013. In addition to being active in the community and supporting environmental nonprofits and local charity organizations, they have non-discriminatory policies, promote from within, provide maternity and paternity leave and allow employees to bring their kids to work one day a week.

GHP was one of the first small-to-medium enterprises in China to publish a report based on the Global Reporting Initiative guidelines, which provide methods for measuring sustainability-related effects and performance. GHP uses recycled paper for its pizza boxes, packaging and menus. GHP also held a competition to design a sustainable pizza box and is exploring viable options for it.

The cost savings of operational efficiency add up. With the changes at Gung Ho! Pizza, the owners have noticed a marked difference.

GHP’s decision to focus on a green approach while renovating their retail stores was a logical next step. Commercial electricity at GHP’s Sanlitun location in Beijing costs 1.2 RMB (about 20 cents) per kilowatt hour. In contrast, the average cost of electricity to commercial customers in the US is about 10 cents per kilowatt hour. The high variable cost of electricity in Beijing provided a compelling case to invest in energy efficiency.

From an environmental standpoint, improvement in efficiency reduces pollution. China’s air pollution, a dire problem on the eastern seaboard, is largely caused by the mix of fuel sources used in the production of electricity. The majority—70 percent—of China’s electricity is generated with coal. By comparison, 40 percent of the United States’ electricity comes from coal. Only 4 percent of China’s electricity is created through natural gas, which burns much cleaner, compared to nearly 40 percent in the US, and hydroelectricity and nuclear energy play relatively negligible roles in China.

Given that China is steadily increasing goods output, it is important to consider energy intensity, which measures the amount of energy required for each dollar of GDP. In 2011, China’s energy intensity was 24,708 Btu per dollar of GDP, while in the US it was a third of that at 7,328. Reducing energy intensity creates economic benefit by maintaining output but reducing consumption.

“The most obvious benefit is where we were wasting resources earlier. Laura (Laura Xiao, the in-house environmental manager) helped identify potential areas for savings in utilities – energy, water, waste” Jade Gray, co-owner of GHP, said after GHP measured the energy consumption of several major pieces of equipment in their stores.  “We discovered that 20-30 percent of the power in one retail store was being used by an extraction fan. We realized we didn’t need that on all day but only during rush hour,” he said. “We cut that off, and saw savings of thousands of RMBs. Then by blocking draft at our doors and windows, we saved 10-20 percent on heating costs.”

GHP installed switchable power outlets, and LED and fluorescent lamps in the staff areas and replaced the biggest source of electricity consumption – the electric pizza oven – with a gas-fired oven. But the company didn’t stop there. A simple payback analysis was performed for an electric versus a gas dishwasher. The initial cost of the gas dishwasher was about twice as much as the electric option. However, the energy cost per wash of the gas dishwasher proved to be much lower than that of the electric dishwasher. Because of the high cost of electricity, the capital cost of investment in gas over an electric dishwasher would be recovered in one to three years, depending on usage. GHP has management training in energy efficiency and performs weekly spot checks to ensure everyone is on board.

“Another big impact on P&L [profit and loss] would be marketing impact. It was never our intention to use our green initiative as a marketing tool; but our social programs generated PR,” Gray said. “We have created a media profile that we wouldn’t normally be able to afford. We are trying to spread the word about our business, so we welcome that attention. “

Gung Ho! Pizza has purposefully integrated sustainability into its business and reaped tangible rewards not only in terms of environmental benefits, but also economic returns, improved employee retention, and public relations.